Changes in Gwenview for KDE SC 4.10

I have been kept very busy during the last six months with Homerun, spending little time on Gwenview. Luckily Gwenview received several contributions from other developers during this cycle, so Gwenview 2.10 (from KDE SC 4.10) features some significant improvements.

Huge kudos to Benjamin Löwe for his work (among other bug fixes) on the thumbnail views!

He introduced custom thumbnail ratios. Until now thumbnails have been drawn in square cells. This often resulted in wasted space between rows. The thumbnails cells now default to a 3:2 ratio, which look much better especially with wide-screen pictures. If this is not clear, checkout the before/after screenshot:

This can be tweaked through an hidden configuration option: ThumbnailView/ThumbnailAspectRatio. If you want to go back to the previous format, set this key to 1.

As if it was not enough, he worked on ensuring thumbnail views scroll to show the correct item in various situations, such as when starting Gwenview with an image as an argument and the thumbnail bar is visible.

This feature has been wanted for a long time...

Work started at Akademy: after attending a color profile session in the morning, I got cornered in the afternoon at the cafeteria by Boudewijn Rempt and Kai-Uwe Behrmann... No way to escape any longer!

Boudewijn started the work during this afternoon, and I continued on it afterwards.

It currently misses (at least):

Until now, my main gripe with Gwenview importer was that it did not list everything: one had to navigate through the folder tree of the camera memory card to hunt for images. The experience is even worse when dealing with a smartphone folder tree.

The new importer is a bit different: it is recursive. When you plug a device it lists all images and videos. No need to know if they are stored in "DCIM/FBAR1000" or "DCIM/FBAR1001".

In most case this is what you expect, but not always: plugging a smartphone is a good example of a situation where you do not want to list all medias of the device: The pictures you took with your phone are usually in a sub-folder of a "DCIM" or a "Pictures" folder, but the phone contains many other folders filled with application data which you do not want to list (unless you really want to import that Angry Birds splash screen!)

Gwenview importer does not magically handle this for you, but tries to be reasonably smart: it is possible to select the root folder to list, and it will remember the last root folder for each device. This way, next time you plug your smartphone in, only the relevant pictures and videos should be listed. 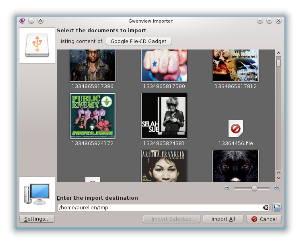 The importer showing covers of music albums on my phone (yes, I have odd musical tastes)

After clicking on the "Google File-CD Gadget" button, I can restrict the importer to list the content of the photo folder and its subfolders 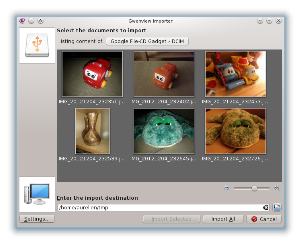 Now only my test pictures are listed, and it will show up this way next time I plug the phone

That's it for this version, hope you like it!