First, Burger Party now has a new world: Japan. You might remember I wrote earlier about drawing its background, it is finally in. This new world is far from finished, though: it is missing customers, a boss, a "unlocked item" image and some more world-specific ingredients, but then version number is only 0.7, so I think it's OK... 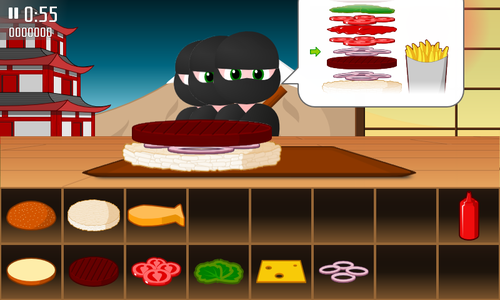 The third significant change is the way customers appear. In previous versions, waiting customers were all staying next to each others, which was a) not very realistic b) prevented you from knowing how many customers you still had to serve to complete the level. In version 0.7, customers are now waiting in line, solving both problems.

Finally, I received a new version of the music from my musician brother, the melody in 0.6 was nice but very short, this new version is a much longer piece, which I am sure you are going to enjoy!

As usual, a few minor changes have made it in as well:

Get it from the usual place!