I thought the fix was simple, filed this review request, which got in.

But that was too easy. Two weeks ago it was pointed out to me that the fix was wrong, and was causing a blink at the end of the hover animation. It's the kind of subtle bugs which you don't see at first, but can't ignore once it has been pointed out to you. Here is a short video demonstrating it:

How does one debug such a bug? If you are smart enough, you look at the code, let it sink in you and at some point yell: "AH! THE BUG IS THERE!"

On the other hand, if you're like me, you need more information. Over the years I built a few techniques to help debugging graphical issues. Here are the ones I used there.

This is the code we are interested in. It comes from dolphin/src/kitemviews/kstandarditemlistwidget.cpp, in the paint() method:

When faced with graphical bugs, a trick I often use is to save pixmaps to disk for review.

In our case, we would like to know what gets painted on the widget at the end of the if (isHovered()) block.

First step is to reproduce all paint operations on a QPixmap.

Now that we have the content of the widget in a QPixmap, we must save it. This is where one has to be creative to come up with a way to generate names which do not step on each others: since we are saving images for an animation, we can't use something like /tmp/image.png, otherwise we will only get the last frame.

I decided for this scheme: /tmp/$filename-$hoverOpacity.png. Here are the new changes:

Note the call to painter2.end(): the painter must not be active anymore when saving the pixmap to disk.

After applying those changes, I restarted Dolphin, moved the mouse over an item, close Dolphin and looked inside /tmp to find a bunch of images here.

Sometimes looking at the images is enough to get a hint at what the problem is, but unfortunately, not this time. The differences between two consecutive frames was too small for me to understand what's going on.

I needed images which would be easier to analyze and compare. This brings us to the second technique I used.

What do I mean with easy-to-analyze images? I wanted images I can inspect with a color picker and draw conclusions from.

Here are the necessary changes: 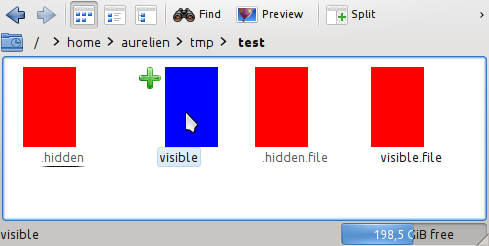 I could now look at those images more closely. I like to use GIMP for this, because its color picker provides the value of the alpha channel and it allows to load several images as layers with "File > Open as Layers...".

Here is GIMP with all images loaded as layers, showing the color of column 2 when hoverOpacity is 0.532: 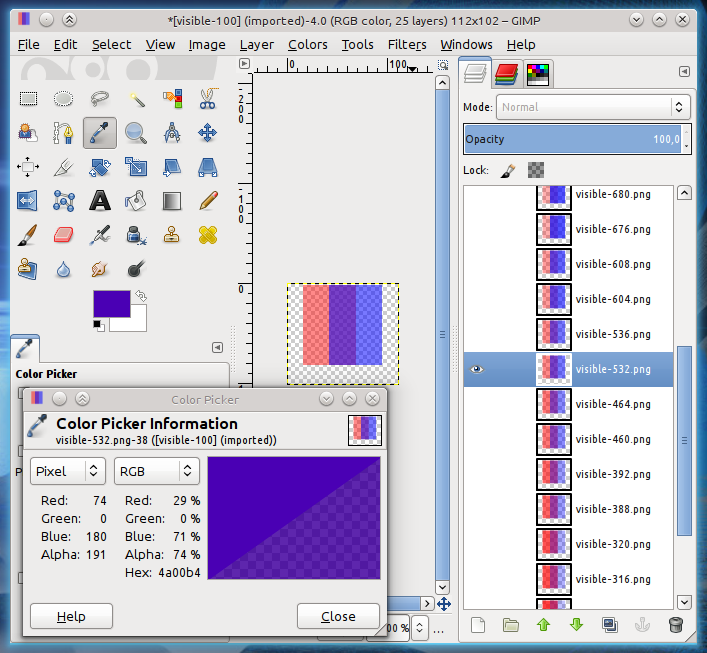 An opacity of 0.532 means the image should roughly be half red and half blue. Furthermore, the middle column should still be fully opaque since this column is fully opaque on both m_pixmap and m_hoverPixmap.

But this is not what is happening here: red is at 29%, blue is 71% and alpha is 74%. This gives more insight: the red image (m_pixmap) is fading out faster than the blue image (m_hoverPixmap) is fading in.

Time for some maths

(In this section, to keep formulas short, I am using pixA instead of m_pixmap, pixB instead of m_hoverPixmap, bg for the background and v instead of hoverOpacity())

Before my first fix, Dolphin was doing something like this:

As v increases from 0 to 1, pixB gradually appears over pixA. pixA never goes away, it is still visible behind pixB.

My first fix changed it to something like this:

This is wrong as well. Here is why:

What we want to do is a linear interpolation between two pixmaps, where pixA slowly fades out as pixB fades in.

Let's assume our background and pixmaps are fully opaque (it simplifies the math but still exposes the flaw).

Linear interpolation between two alpha-premultiplied images pixA and pixB with a factor of k is defined with the following formula, where c(x) is any of the ARGB component of pixel x, normalized to range 0..1:

Note: this formula is only valid for alpha-premultiplied images, see QImage doc for more details

If pixA and pixB are fully opaque, it can be simplified to:

This is the same as the interpolation formula, what could be wrong?

After line 2, the widget shows pixA painted over the background using the SourceOver formula, with k = 1 - v. The temporary appearance is thus:

After line 4, the widget shows pixB painted over tmp with k = v. The final pixels are thus:

Which is different from the expected:

To get the correct result, we need to apply a different painting formula. Unfortunately, QPainter does not provides an Interpolation mode. It does however provide a Plus mode, which simply does the sum of each components:

This makes it possible to implement interpolation this way:

First, paint m_pixmap, reduced by 1 - hoverOpacity() in a transparent pixmap:

That's it! This version works as expected:

Dolphin from KDE SC 4.10.2 includes this fix. Hope you enjoy your smooth mouse over animations!