On the second week of March, I went for some vacations in the mountains. I came back tired but refreshed.

And then I read the free software news to catch up on what happened while I was away.

I am not going to comment on whether it made sense to create Mir instead of working on Wayland. What actually happened is I was left flabbergasted by such a waste of energy from some people whose smartness is only surpassed by their unwillingness to compromise and cooperate, on all sides.

My mind was still in the mountains and I didn't feel like diving into yet another uprising in our geeky, Whoville-sized, world, didn't want to pick a side and argue endlessly.

Feeling a bit depressed, I decided to try something different. The family now owns a Nexus 7 tablet. The kids (and their parents) enjoy playing games on it. You may remember I wrote games in the past. I thought it would be a nice change to write an Android game, I also liked the idea of being able to get people I know to try my stuff.

There was only one problem with this idea: I am not fond of Java. I looked if it were possible to use Python to write Android games, but it does not seem to be doable right now. I considered using the NDK instead, so that I could use C++, but in the end decided I should start with the more widely-used tools. I downloaded the Android Developer Tools and settled for the libgdx game development library.

I decided to start small, with a "Burger" game. It currently looks like this: 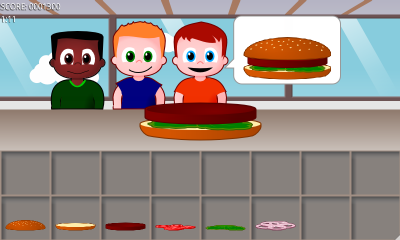 It's been only a week of evening hacking, so it is a very early version. I really enjoy the process of working on this little project though, it does a good job at keeping my mind busy with something positive.

Some observations on the technical side:

This post was tagged burgerparty, gamedev, kde and mir