As usual, KDE had a booth there. This year, it was handled by four of us: Sébastien Renard, Benjamin Port, Nathan Sala and myself. 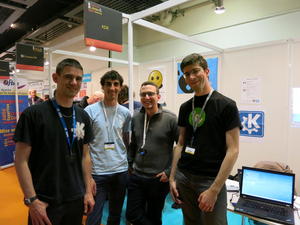 We had a great time demonstrating KDE workspaces and applications. I brought a copy of the awesome "Comics with Krita" DVD, which we used to catch the visitor eye. This strategy worked quite well and provided an unusual way to demonstrate KDE products compared to other years: we would talk about Krita, widen the discussion to demonstrate Calligra, then widen it more to show Plasma workspaces and the other KDE applications. 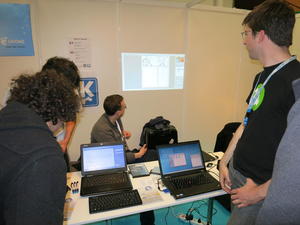 Speaking of Plasma, we got a lot of questions about Plasma Active and Contour: users are really eager to give it a try. Unfortunately we did not have hardware to demo it, so we had to resort to video demonstrations. This makes me even more willing to get a Vivaldi tablet once they are available.

Our booth was located between the GNOME and the Enlightenment booths, an ideal setup for some fine trolling discussions :)

This year we had a wireless keyboard with integrated trackball. It took a bit of time to get used to the trackball, but this device made it easier to do demonstrations while talking with visitors, removing the need to crouch to reach the laptop keyboard. 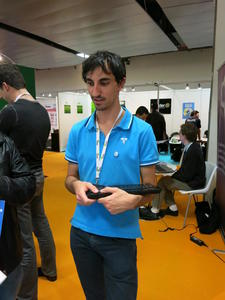 Benjamin on the keyboard

On the second day, we demonstrated (among other things) a little-known aspect of KDE products: games! We had good fun with KTuberling, KBounce and KBreakout, tried with limited success to beat the computer at Bovo, but Granatier was without doubt the real star of the day. At one point we plugged the wireless keyboard on the demo laptop and enjoyed a few 4-player games, thanks to a finely tuned keyboard configuration (keep in mind the laptop sees the two physical keyboards as only one logical keyboard...) 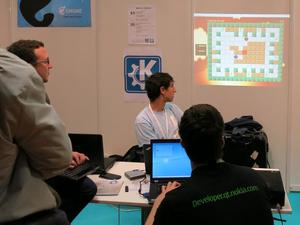 A 2-player game of Granatier running

We even got our GNOME neighbors to play a game on our booth :) 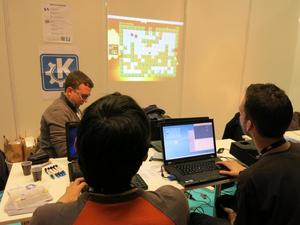