And now for something old... Plouf!

This is by far my longest release ever: 18 years!

18 years ago I was learning the ropes of coding on an Amiga 500. Using AMOS, a game-oriented Basic, I played with creating games and demos. I was not as persevering as nowadays: most of those creations got started and abandoned a few weeks later, but I did manage to finish one of those game attempts: Plouf!

Plouf! is a top-down game where players sit on floats, trying to sink the other players by throwing sea urchins at them. "Plouf!" is the French onomatopoeia for the sound made by an object when it falls into a liquid.

You control your float like an RC car: you can accelerate, slow down and rotate left or right. The islands on the screen are randomly generated, so each game looks different.

It only supports 2 or 3 players: I didn't have the skills to code a computer player by then.

You start with a very limited number of sea urchins, so you need to collect them as they appear randomly in the sea. You can also grab float bonuses which increase the strength of your float by one point.

Here are some screenshots: 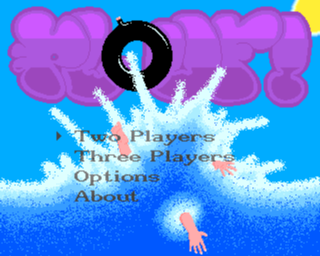 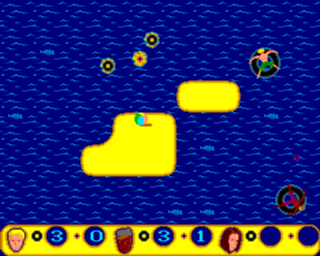 A 2 player game, blond guy has just thrown a sea urchin, but it's going to miss its target 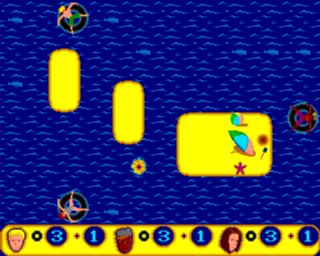 I released Plouf! as a shareware in 1994: a floppy disk of the demo version (limited to 4 games) could be obtained from a few Amiga freeware and shareware floppy disk dealers (this was a time where Internet was not ubiquitous...)

It sold the impressive number of 0 full versions :( Playing with friends is a lot of fun, but I guess the lack of a single-player mode was a show stopper.

Some time ago I decided to release it as free software. I bought a NULL-modem cable and transfered the source code to my laptop.

There was one problem though: all text was in French :( I wanted to at least translate all visible strings to English. One would think it would just be a matter of opening the source code with a modern editor and run the AMOS Compiler to regenerate binaries... It's not that simple: the format of .AMOS files is binary: it bundles the source code and the program assets. This means it can only be edited with AMOS Editor. I thus ran AMOS Editor in UAE to do all my edits... I can confirm editors have made a lot of progress since 1994... 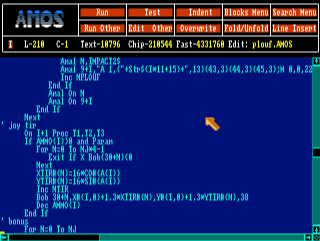 Nevertheless, it was a lot of fun to use these tools again. I eventually managed to figure out again how everything worked. I translated the visible strings (note that I didn't went as far as translating the source code), adjusted a few other things and here it is: Plouf! is released under GPL 3 or later license!

To play Plouf! you first need to download plouf-1.1.adf. Then either you are the lucky owner of an Amiga and you know how to transfer it on a disk to use on your machine, or you don't have an Amiga and you can run it with an Amiga emulator.

If you want to give it a try on an emulator, I recommend FS-UAE, a user-friendly fork of UAE, with a nicely done frontend.

The source code is available from github: https://github.com/agateau/plouf. Just keep in mind you can't really read it online since the .AMOS files are not text files.

This post was tagged amiga, amos, gamedev and games