The bonus system is taking shape: racers can now pick them up and get one among the huge bonus list of gun, gun or gun... :) Not much choice for now because I was waiting for the code responsible for handling bonuses to stabilize before I build more on top of it. I think it's in a good enough shape now to start building more bonuses.

AI competitors can also pick bonuses, but Artificial Stupidness would be a more appropriate term to describe their current behavior: they trigger the bonus as soon as they pick it up :). Another interesting aspect to work on later.

I have been struggling with the difficulty of the game: it was too easy to end up straight in front of a wall. I mitigated this by reducing the restitution of the walls and of the cars. It is more playable now, but I am still wondering whether I should allow cars to rotate in place when speed is close to 0. This would make it easier to get unstuck. I noticed a few games do this.

Want to give it a try? I built a .apk for you to test:

This build comes with a quite large debug screen accessible from the settings screen. Feel free to play with the settings and let me know if you come up with some interesting combinations! 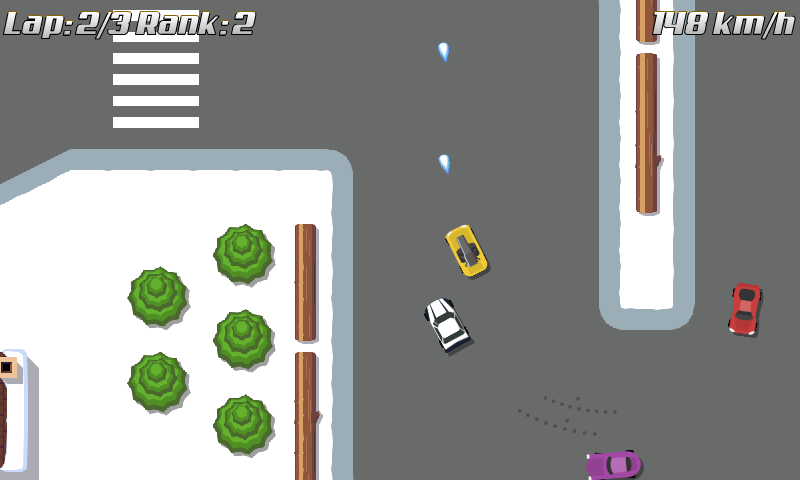 My next topic is going to be damages. I want to change the way damages are handled: instead of a system of health points where you can take a few hits before dying permanently I want hits to disrupt your path, probably with a spin... Yes, similar to Mario Kart, again. I also plan to build more bonuses, and I hope to depart from Mario Kart here.

This post was tagged bonus, gamedev, greenyetilab and race