I have been experimenting lately with a different art style for Tiny Wheels. Since the gameplay itself is quite old school, I decided to try pixel art graphics.

There has been a bit of noise lately regarding whether using pixel art in new games was a good idea after this article got published. I decided to go this way nevertheless for few reasons:

As I was leaving my beloved Inkscape behind, I shopped around for Linux software to use to produce my blocky vehicles. I played a bit with GIMP, a bit more with Krita (which I really wanted to use, but it's not really designed for pixel art) and finally settled on Aseprite for now. It's definitely made for pixel art, and makes it easy to create animations thanks to its onion skin feature.

Here is a preview of what I have produced so far: 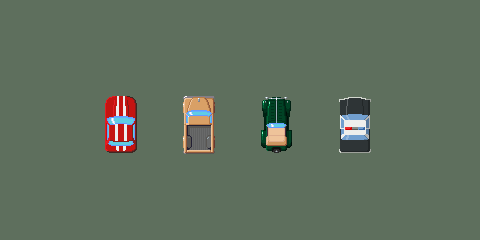