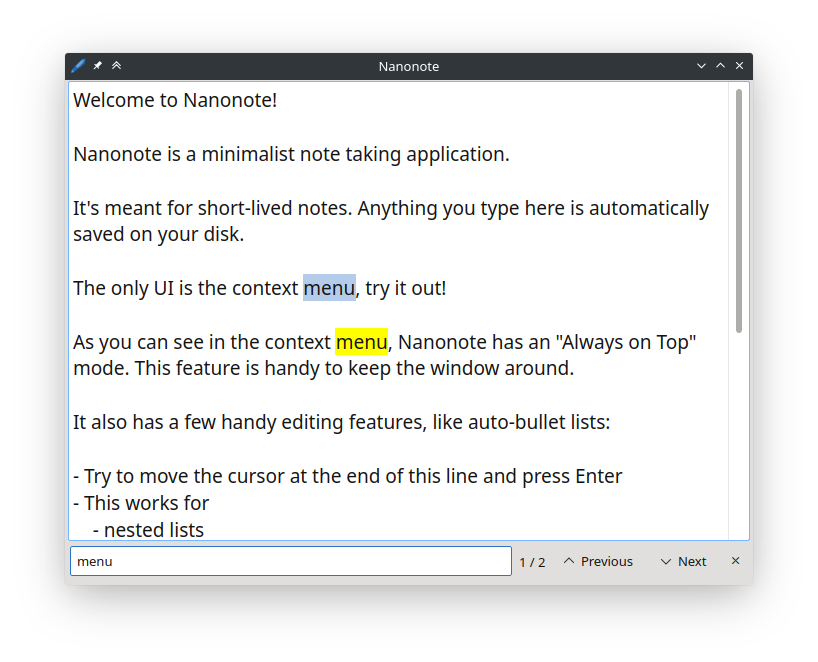 Second, the ability to reorder selected lines using Alt+Shift+Up and Alt+Shift+Down. This is very handy to order lists:

It also comes with support for macOS and Windows!

This the first time I release a macOS app and it's been a very long time since I last released a Windows app!

Disclaimer: The macOS dmg is unsigned. Sorry for that, I just don't want to spend $100 a year on an Apple developer account to be able to sign and notarize Nanonote. Same thing for the Windows installer: it is unsigned.

Where do I get it?

You can get installers for version 1.3.0 from the release page.

Nanonote is my guinea pig

I have been working for some time on a project to make it easier to create and distribute Qt apps: cookiecutter-qt-app. This project is a Cookiecutter template to create "real world" Qt app, meaning out-of-the-box support for translations, data files, multi-platform packaging and other niceties.

It is still very much a work-in-progress, but I regularly update Nanonote source tree to match what cookiecutter-qt-app generates as a way to validate the template. The macOS dmg and Windows installer are a result of this work.